CFW provides ventilation systems for agricultural use, custom-designed for feedlots or other applications. We can also supply a variety of robust standard fans, components, accessories and services. Our fans are robust, competitively priced and designed for optimum efficiency. With years of experience, we can provide the expertise necessary to maximise the performance of your feedlot ventilation system. 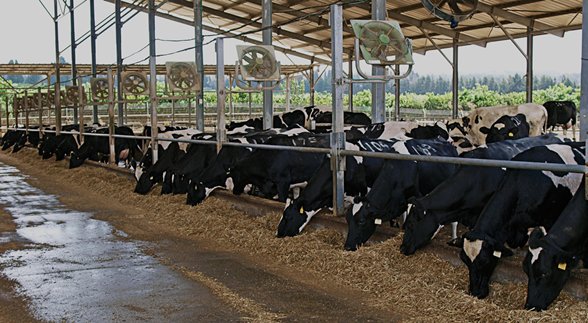 Feedlots or feedyards exist to improve the meat quantity and quality of livestock. Enclosed feedlots contain a large number of animals in a relatively small space. Such facilities are better insulated, but if the building is completely enclosed, ventilation problems can arise.

Building conversions and locations often mean that natural ventilation is not enough. Though cooling fans can provide enough air velocity in correctly laid out naturally ventilated facilities, they are not a replacement for a well-designed mechanical ventilation system. Natural ventilation will not optimally remove contaminants when wind speeds are low, barns may have inadequate openings and buildings may be badly placed or oriented (e.g. downwind from large air flow obstructions).

In these conditions, adequate mechanical ventilation systems are required to regulate temperature and limit the concentration of dust, water vapour and waste compounds (such as ammonia) in the air. Excessive humidity, for example, can contribute to the prevalence of pneumonia and other diseases.

Many buildings built to house beef cattle have the problem of still air or “dead zones” where there is not enough fresh air and the risk of heat stress is increased. Heat stress from high or rapidly fluctuating temperature has a number of negative effects on cattle: lower feed intake, a higher risk of pneumonia and other diseases, and lower fertility rates and other reproductive problems. The result is lower production and an increased mortality rate.

The care that is taken to confine possible aggressive cattle, and the large size of the animals, can worsen the situation. In these circumstances, there is an increased need for ventilation fans. With the right exhaust and circulation fans and accessories, properly installed and maintained, it is possible to

To reduce heat stress, air velocities of 2.54-3.04 m/s are recommended. Cattle naturally move to positions where ambient air conditions are best, often even if other conditions are not ideal, so it is important for feeding behaviour and productivity to ensure that air speeds are high enough at the level of the cattle.

For winter (minimal ventilation) conditions, it is recommended that fans should have a capacity of at least 0.71 m³/min per cow. In very cold conditions, high airflow from outside is undesirable and heating may be necessary. Where the inside temperature nears freezing point, heat exchangers will not be adequate.

The air exchange rate that is needed changes according to outside temperature and humidity, number and density of animals, and other factors. With proper ventilation, the indoor air quality (IAQ) in barns should be nearly the same as that of the outside air. Harmful gases, pathogens and dust should be removed. An air recirculation exhaust system will eliminate poorly ventilated areas in the feedlot.

The necessary air velocity can be achieved by installing enough fan capacity in the right barn locations, whether a cross ventilation or tunnel ventilation design is selected.

Mechanical ventilation may use positive pressure, where fans force air into the barn, or negative pressure (exhaust fan), where air is drawn out of the building. The system that is used depends on the construction of the barn, but negative-pressure systems are the most common.

In addition to fans, maintaining airflow throughout the feedlot may require ducting. Variable speed drive (VSD) fans or other airflow control mechanisms can be used to adjust the rate of flow according to outside weather conditions. The operating principle of VSDs gives them the potential to save energy and makes airflow control automated by temperature and humidity sensors easy.

A management system called “fan staging” is often used for agricultural ventilation. Stage one fans provide minimum ventilation, while successively added stages mean that more fans are in operations. The appropriate airflows required of each stage, the number of stages and the conditions (temperatures) under which a particular stage should be activated must be chosen. Usually, higher temperatures require higher-stage fans.

It is important to realise that fan performance data are normally produced in standardised conditions. Modifications to a building or its ventilation system can have a large influence on how the fan will perform in practice. When calculating the airflow capacity of fans, the conditions in which the entire ventilation system is operating must therefore be considered. Among the factors that can influence the actual performance of a fan are:

The ideal system represents a good balance between capital costs, operating costs and high reliability and performance in providing the correct air quality and air velocities to all the animals in the building.