CFW is an acknowledged air technology leader with extensive experience in agricultural ventilation systems. We will match a ventilation system to your requirements, providing either standard or custom fans. We also supply evaporative cooling systems, dryers and humidifiers. 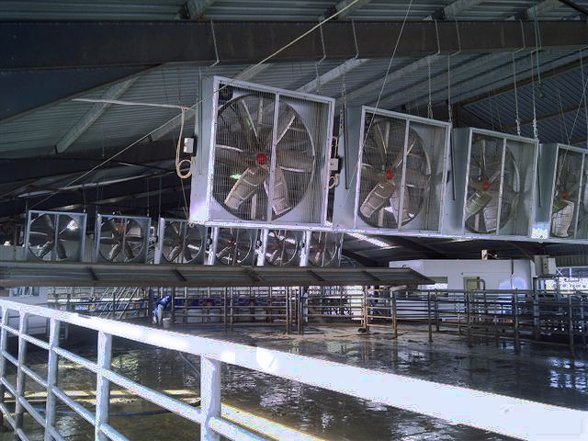 For the health and productivity of a dairy herd, buildings need to introduce fresh air at the level of the animal without causing undue drafts. Reducing heat stress and disease will lead to increased milk production. Adequately ventilated shelter can raise output by up to 25%.

Ventilation and air circulation systems in dairy farming facilities also reduce levels of heat, moisture and impurities. These impurities include pathogens, odours and harmful gases such as hydrogen sulphide, ammonia and methane. The reduction in contaminant concentrations is mainly due to dilution by fresh air entering the building, though there is also a smaller influence from the removal of contaminants in exhausted air.

The result is improved health and comfort for both animals and farm workers. The life of wooden and other structural elements in the building is also extended by proper ventilation, since it helps to prevent condensation and remove gases that promote corrosion and fungal damage.

The necessary rate of exchange depends on the outside temperature and humidity and the number and density of cows in the barn. The indoor air quality of the barn should consistently be near the quality of outside air, with about the same contaminant humidity levels.

Ventilation is particularly important for preventing or managing heat stress. Cows are much more susceptible to heat stress than people are, while being relatively tolerant of cold. Heat stress reduces feeding, lowers milk production by as much as 30%, lowers fertility, and increases the risk of diseases like pneumonia. The problem is exacerbated by the large size of the modern cow and the numbers of animals that are often kept within a restricted area. Proper monitoring and control of fans by thermostats will limit the possibility of human error in operating the system. In cold and humid conditions, the animals are vulnerable to infections such as pneumonia. At these times, the ventilation system must remove excess moisture without causing draughts that will further cool the animals.

During the course of the day, as well as through the year’s changing weather, the required air exchange (in CFM, m³/s or air changes per hour) varies. Hot weather generally results in a greater need for ventilation, while in very cold weather ventilation is often reduced to prevent pipes or manure from freezing or snow or rain from blowing in. Animal numbers, sizes and age also have an effect: a larger animal or more animals clearly need more air, and removing vapours is more important where there is wet or soiled bedding. Existing cow housing is often inefficiently or insufficiently ventilated because of increases in average animal size in recent decades and obstructions to airflow.

Many ventilation systems have problems that originate with the facility’s design, installation or operation. A well-designed mechanical system is often the best choice to provide enough ventilation economically. Natural ventilation has been successfully tried, but mechanical systems result in more consistently good air quality, since they do not rely on outside wind and are less influenced by the building’s location and environment.

Natural ventilation augmented with cooling fans is sometimes used and can produce sufficient airflows if conditions are right. The great advantage of this arrangement is that target air velocities at cow level are relatively easy to achieve. Correctly spaced cooling fans will encourage cows to lie and feed in their stalls and thus to be more productive, since a stressful ambient situation, such as excessive heat, leads them to take advantage of the air velocity in specific areas. However, when there is insufficient wind, indoor air quality (IAQ) generally deteriorates. Fans placed over stalls and barns, though they help to mix the air and maintain the right air velocities, are not enough to ensure enough air exchange without proper side opening or additional fans.

Tunnel ventilation systems, being mechanical, are better able to ensure an adequate supply of fresh air. However, tunnel ventilation does not provide even airflow velocities throughout the barn. This means that average air velocities need to be fairly high. Air speeds of about 2.54-3.05 m/s are said to help to reduce heat stress. If air velocity is too low, cows will tend to stand in stalls to maximise the airflow over them. More recent tunnel ventilated facilities may have tunnel ventilation fans designed to provide 0.47 m³/s of airflow per cow as well as cooling fans to maintain sufficiently high air speeds at the level of the cows. Cross-ventilated systems are also possible.

Modern cross-ventilation systems often use a system by which fans are grouped into “stages”. Stage one fans are those necessary for minimal ventilation and are often in continuous operation, particularly in cold conditions. As requirements increased with increased temperatures or other climatic changes, additional stages are activated.

Elements of the Ventilation System

Properly sized and distributed fans and inlets as well as controls such as thermostats are used in mechanical ventilation. Freestall barns almost always operate with a slight negative pressure of about 314 Pa. Multiple fans (possibly with louvers) are usually used instead of variable-speed fans.

A number of factors must be considered so that the system performance will live up to the potential of the fans. Fan selection according to the overall circulation system used, the blade design and the sizing is obviously relevant. It is important to take all openings, accessories and likely obstructions into account when designing and installing ventilation equipment. Failure to do this may result in a system that works, but energy costs will be higher than expected when the system is working hard enough to produce adequate airflow. Maintenance costs may increase and fan life may be shortened. For this reason, agricultural engineers or air system professionals are usually needed to achieve the right ambient conditions while keeping operating and maintenance costs down.