CFW designs, supplies and installs aeration systems for aerating farm crops and for the post-harvest storage of agricultural crops such as peanuts, onions, potatoes and seeds. We can offer to supply the fans only or we could provide the complete turnkey installation complete with the electrical and control systems integrated. 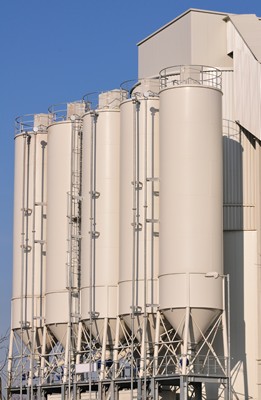 The Purpose of Crop Aeration

Crop aeration helps to preserve the quality of the product. Air with the proper temperature and humidity level can reduce the risk of fungal or bacterial growth, shrinkage and insect infestation. Low volumes of air are distributed throughout a storage vessel, eliminating the possibility of hot spots. Although aeration does reduce moisture levels, it should not be used as a drying system for wet crops. Crops need to be dried in other ways to prevent spoilage before being stored.

Airflow resistance increases with the friction created as the air moves between crop items, grains or packages. This “static pressure”, often expressed in centimetres of water column or Pascal, must be overcome by fans to aerate the crop properly. Manometers or pressure gauges are used to measure static pressure, which might be negative or positive according to whether the fan is exhausting or introducing air into the plenum.

The airflow velocity and the length and width of the channels in the crop that the air must move through will influence the air resistance of a given crop. These factors, in turn, will depend on the airflow rate, crop type and crop depth for grain and oil seeds. Crop depth has a great influence on the static pressure for a given airflow rate. For crops such as potatoes and other produce, crop depth is also important, but airflow resistance is low. Static pressure seldom exceeds 249.1 Pa.

Ducting, elements of plenum design and fan accessories can further add to air resistance. Perforated bin floors commonly have little influence on airflow resistance, but ducts can add significantly to static pressure, especially if they are too narrow or long. Corrugated plastic ducts tend to have small exit areas and thus have a high air resistance, possibly exceeding the 124.54 Pa which is often used as a rule of thumb for duct-added static pressure. Inlets and exhaust vents that are too small or that are obstructed will also increase the total air resistance.

The ability of a fan to move air decreases as the pressure being worked against increases. The series of points indicating volume of airflow at a given pressure is known as the fan performance data. The impeller size, speed and shape as well as the motor size influence the performance of the fan. Fan types and models can differ greatly in the performance they can offer, even when they have equivalent motor sizes.

Propeller fans, a type of axial fan that can be either belt-driven or direct-driven, cannot usually generate high pressures. They are used for potato aeration, produce cooling and hay drying. They are rarely used to aerate grain crops.

Tube-axial and vane-axial fans are usually direct-driven and quite efficient at low static pressures and are not too expensive. They are commonly used for grain aeration. They are generally relatively noisy.

Centrifugal fans used for crop drying and aeration are generally backward-inclined. They are quiet and very efficient at high static pressures, but the capital costs are usually higher. They are generally used for ventilation and some heating applications. The motors of some centrifugal fans are vulnerable to burning out outside of the pressure ranges they were designed for, making them unsuitable for many agricultural storage and drying tasks.

Depending on the model of fan and its installation, the heat from the motor of the fan may enter the airstream. For certain types of crops that need to dry fast, this may be an advantage.

It is often desirable to install multiple fans. This might be because no available single fan is capable of delivering the necessary performance, because the starting electrical load needed for a single fan would overload the electrical system, because multiple fans allow a wider range of airflows while maintaining efficiency, or because a more even air distribution can be achieved thus given the situation.

Multiple fans may be arranged either in parallel or in series. The latter arrangement is used relatively seldom and generally consists of a few tube-axial or vane-axial fans supplying deep bins with high static pressure. The airflow is not increased by additional fans in series, but the total pressure is. The more commonly found parallel arrangement is used with moderate pressure and high airflow requirements. All the fans in such an arrangement face the same pressure, but additional fans increase the airflow.

Proper fan selection is essential to proper aeration, since the airflow provided will determine how long a crop will take to dry or cool. Knowing the airflow that a fan is currently providing also means that the necessary steps can be taken proactively to prevent a loss in product quality.

Several pieces of information are needed for adequate fan selection.

This information reveals the most important fact about the fan: whether it can provide enough airflow in the situation in which they will be used. It is critical to preserving the quality of crops that the fan should keep them cool or dry enough in storage, so that one should ascertain whether the selected fan is adequate for the task.

Low noise levels and the price of the fan are important (but usually secondary) factors to consider. If no fan available is correctly sized, more than one smaller fan can be used.