At CFW, we understand that cleanrooms must fulfil exacting standards. As an established leader in air technologies, we offer air handling solutions customised for use in clean rooms. We provide blowers designed to overcome customer-specified static pressure and provide the required airflow, as well as filter fan units. Fans designed for safety at high levels of heat and where explosion risks are present are available. 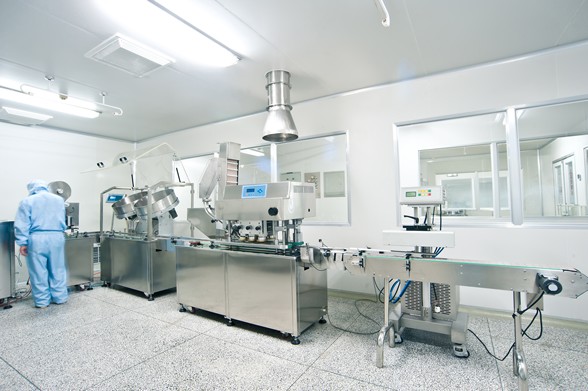 Cleanrooms require strict control of airborne particle counts. These high standards reflect the central role of cleanrooms in the production of sensitive products and in research. Dust, smoke and microorganisms can easily harm production. Toxic or flammable chemicals and pathogens that may be present in the cleanroom, as well as electrical equipment, can also present safety concerns. HVAC systems must be able to handle potentially explosive atmospheres and fire risks. The costs of fires in the semiconductor industry are enormous, and cross-contamination between rooms or failure to contain dangerous substances can easily occur. A ventilation system needs to be designed to minimise the risk while maintaining high airflows.

Because air motion and airflow patterns are important in cleanrooms, HVAC systems must be carefully designed for the intended use, dimensions and configuration of the room. It is a specialist task.

Ventilation systems in clean rooms can be of two types: turbulent air flow (also known as turbulently ventilated or nonunidirectional rooms) or laminar air flow (unidirectional). In the case of turbulent air flow clean rooms, airflow patterns are much the same as in other rooms: the air is supplied by a ceiling inlet and currents are allowed to eddy and proceed to exhaust outlets. No measures are taken to control the specific direction of the air currents. However, unlike ordinary ventilated buildings, turbulent air flow clean rooms are characterised by high air supply, room pressurization and high-efficiency filters. The increased air supply means that more air changes per hour can be achieved and pollutant levels are correspondingly diluted, while room pressurization helps to ensure that contaminated air does not enter the room from any opening and filters remove contaminants.

In clean rooms in which standards of pollutant control are even higher, laminar air flow patterns are established. Air currents move in a more or less straight line (to the extent that there are no obstructions) from the inlets to the outlets at high and uniform speeds (typically about 0.4 m/s), which helps ensure that there are no dead-air spaces for particles to settle and that larger particles are quickly removed. The number of air changes per hour that are maintained are even higher than for turbulent air flow clean rooms and higher standards of cleanliness are established. Airflow patterns are usually vertical, from the top of the room to the bottom, but horizontal airflow cleanrooms also exist, particularly in the aerospace industry. HEPA filters are installed across the entire surface on the inlet side of the airflow.

Requirements for a cleanroom HVAC system include

The industry has no single standard regarding the necessary airflow velocity or air change rates (ACR).

Class 100 clean rooms allow a maximum of 100 particles of 0.5 microns or larger per cubic foot of air. All air that enters the room must be filtered with HEPA filters, which are 99.97% efficient for particles of 0.3 microns, or ULPA (ultra-low penetration air) filters. Particles below 0.01 micron cannot ordinarily be filtered, as they cease to behave as suspended particles and act more as gas molecules diffused through the space.

The most stringent clean room standards require ceiling filter coverage of close to 100%, with laminar airflow downwards at velocities of 0.5 m/s. This ensures the maintenance of positive pressure and thus prevents the entry of contaminants through leaks, while particles are also speedily removed. Both the velocity of filtered air and the air changes per hour affect the ventilation efficiency of the room.

Requirements for air velocities and air changes are lower when personnel and contaminating processes are not present in the room. Where people are working on manufacturing processes in cleanrooms with stringent standards, up to 720 air changes per hour are called for. Determining the required air changes and velocity requires one to take into account the number of persons, access frequency, process equipment cleanliness and the garbing protocol standards.

The costs of building a cleanroom can be high, with piping and exhaust costs being about half of the total. The total operating costs rise to equal or surpass the cost of building the room in between three and seven years, with an average life of 15 to 20 years. This provides a strong motivation for optimising the efficiency of the ventilation system.

The requirement for high airflow and airflow velocities can result in high energy costs. While it is often assumed that airflow velocity should be 0.4 m/s or even 0.51 m/s for sensitive applications, velocities of as low as 0.35 may be acceptable, for example at times when rooms are empty and without obstructions. Scheduling programmes, timers and occupancy sensors can be used to lower the airflow at these times. Particle counters are another means of automatically controlling the HVAC system.

On average, rooms with filter fan units (FFUs) cost less than ducted clean rooms, and the estimated cost of operating them is also lower. The number of FFUs required can be calculated as (Air Changes/Hour /60) x (volume of room/ 650), where 650 is the estimated air volume output of an installed FFU.

Air systems can use variable speed drives (VSD), also known as variable frequency drives (VFD), to maintaining a lower ACR when feasible and thus reduce energy costs. The ACR is the main variable determining fan and motor sizing for recirculation air handling. Thus, optimizing the airflow rate will not only result in energy savings but may also allow for smaller fans and motors, which will result in lower capital costs. Smaller fans and motors will have the advantage of reducing turbulence and thus improving cleanliness.

Fan efficiency and motor efficiency are also important factors to consider. Motors and other HVAC process equipment should be located outside the room as much as possible to minimize heat gain, increase available space and improve maintenance access. Ductwork with a larger diameter, while increasing expenses and space requirements, should also be considered to minimize pressure drop and thus improve HVAC efficiency. Like reduced ACR requirements, low pressure drops permit motor downsizing. It can also reduce noise and improve filtration and dehumidification.

Efficiency penalties can arise at under part load conditions. Proper equipment sizing, possibly by selecting unequally sized units and taking a modular approach, will help to avoid this problem.